Clear cages, spiking ricocheted balls and peak adrenaline rushes paired with speed and power are among the most telling signs for this racket sport called padel—a motley combination of tennis, racquetball and squash. While the sport is seeing international growth, here in the United States very few know the sport.

MBA student Alexander Frias, on the other hand, knows the sport well. He will compete in his third Padel World Championship later this fall in Malaga, Spain. The competition will begin Nov. 9. 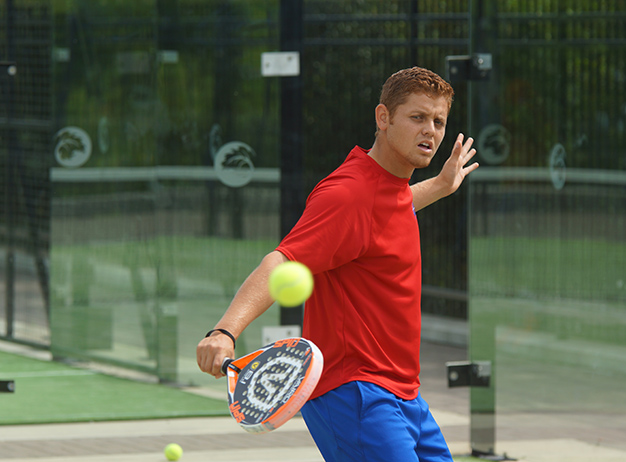 “I’m extremely excited, and I can’t wait to compete,” Frias said. “But at the same time, I’m very nervous. I’ll be flying thousands of miles to represent the United States. I feel very fortunate and blessed to have such an opportunity.”

Padel is most familiar throughout Europe and South America, with prominent teams from Spain, Argentina, France, Germany, Mexico and even Canada. Padel has yet to take off in the United States but various league attempts to make padel an Olympic sport could change that.

The U.S. Padel team is currently ranked among the top 10 teams in the world, and last world championship, the team finished in ninth.

“This championship, I hope to win the entire thing,” Frias said.

Having played padel professionally for three years, the 22-year-old MBA student was first introduced to padel at the age of 18, when he met the team captain of the U.S. Padel team, Mike May. May offered Frias the opportunity to audition for the national padel team. 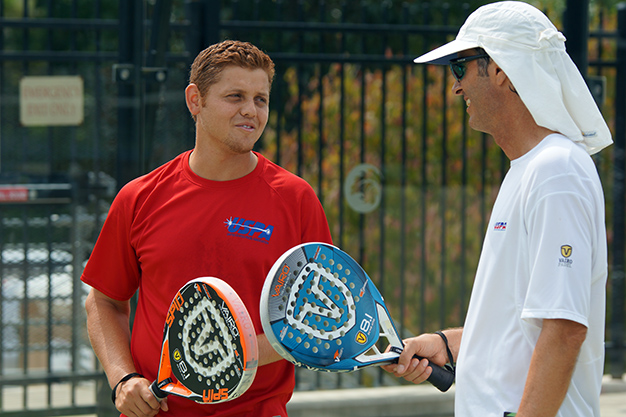 Padel player Alexander Frias talks with Mike May, captain of the national team.

Frias said much of his success in padel is due to his tennis background, having competed nationally on the junior’s level. “All I ever wanted to do was become a professional tennis player,” Frias said. “I devoted my entire life to it.”

Training for six hours a day through all four years of high school and frequent traveling resulted in Frias leaving the sport. “Tennis made me understand hard work and becoming mentally stronger,” he said. “But it just took a toll on me overall.”

Compared to tennis, Frias said he enjoyed padel because it was new and exciting. “It was something I wanted to challenge myself with,” he said. 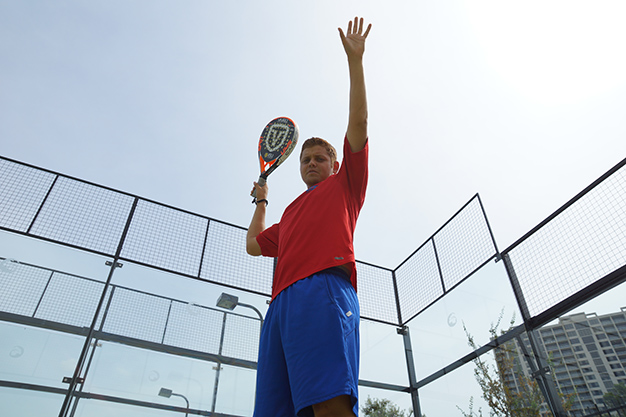 In the Business of Sports

Frias follows in the footsteps of several family members who attended St. Thomas. His parents Elmira and Jesus attended UST, with his father earning an MBA in finance in 1991. His aunt Elsma Hunter and uncle Deacon Will Hunter both earned a Master of Arts in Pastoral Studies in 2011. His sister Danielle graduated with a communication degree in 2014.

As an MBA student with a finance concentration, Frias said his love for both finance and padel are completely different.

“Finance is helping me understand a lot of how the world works and how you can essentially link it to anything,” he said. “Padel being such a huge sport in the world but not yet in the United States gives it a lot of potential that has yet been exposed.”

Dr. Charlene Dykman, professor of management at the Cameron School of Business, said Frias is an energetic and engaged student: “To compete at this level says a lot about his sense of commitment and self-discipline.”